Gaming revenue goes up in the Chinese gambling city

While the big casino operators in the United States focus their efforts on the new online gambling markets in Nevada, Delaware and New Jersey, Macau continues to pull ahead as the gambling capital of the world. The numbers for October are staggering as the casino gambling revenue in Macau reached an all-time high worth MOP 36.5 billion, or $4.57 billion. 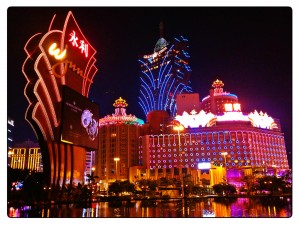 This is by far the biggest amount ever recorded in the gambling city and leaves the old $3.92-billion record set in March in the dust. An increase in revenue was expected in October as analysts predicted that the Golden Week will bring a lot of travelers to the casinos, looking to get in on the action. However, few expected that the rise will be 31.7% bigger than October 2012.

In comparison to the casinos on the Las Vegas Strip, the new Macau record is almost as big as three quarters of the total gaming revenue of 2012. Thus putting any doubt to rest that Macau has overtaken Las Vegas as the preferred destination for high rollers. With the first 10 months of 2013 now in the books, Macau registered an 18.4% revenue increase from the same period in 2012 and reached an impressive $37.1 billion.

The main reason for this huge gaming surge is the focus on premium mass segments while also making sure that the VIP market is not ignored one bit. The combination makes for an incredible array of services throughout the luxurious casinos and creates high margins for the operators. The numbers are impressive across the board and while high rollers managed to make headlines not too long ago at the baccarat tables, it is actually the mass market that drives in the big revenue.

Casinos that offer a large number of hotel rooms for their players tend to have the advantage. More and more players are traveling long distances to get to Macau and they need hotel rooms for their stay in the gambling city. Las Vegas Sands has been gathering the benefits of its plan to focus on the mass market and the Sands Cotai Central has become one of the fastest growing properties in Macau. A new massive area with 75 tables is being constructed at the Cotai Central and it is expected for it to be done in spring next year. 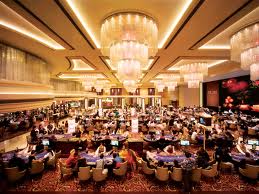 The regulations in Macau impose a gaming table cap on all casinos and this actually turns out to work in the operator’s advantage. The profitability of each table is increased given the high number of players. The upward trend is expected to continue in Macau although analysts predict that the October record will not be broken in November given the surge in player traffic from local holydays that helped push the figures up last month. However, 2013 will certainly turn out to be a record year, especially if we consider that the gaming revenue from the first 10 months is almost enough to match the total revenue for 2012.

A small show at the Wynn Casino in Macau: