A slogan which can quickly catch on today

During the 1992 presidential campaign, James Carville was in charge of the strategy for Bill Clinton and he had three big concepts he wanted everyone to focus on. These were “Change vs. more of the same”, “The economy, stupid” and “Don’t forget health care”. Carville had them written on a paper and posted in Bill Clinton’s campaign headquarters and despite the fact they were meant for the internal audience, the phrases quickly caught on and they apparently worked since Clinton won the elections that year.

The idea that something which appears to be quite obvious to someone from the outside can be completely overlooked by those involved can also apply to the current online gambling regulations in the United States. The importance of fast withdrawal times seems to be completely ignored in this market and this can cause a lot of players to continue their search for other options.

For a lot of players in the United States, the most important thing is the withdrawal times. Bonuses, promotions, games and other elements have become so common that players can easily switch from one site to another without missing out on anything important. However, withdrawing the funds from your online gambling account can take a couple of weeks the first time you do it. The entire process is very complicated at most sites since the player has to prove his identity, send copies of an ID, verify the withdrawal method and so on. Things don’t improve that much with later transactions either as it still takes a long time to get your money through most of the used methods.

If we consider the many unlicensed gambling sites that operate in the United States, we can’t say that there is a lack of options for American players, and the fact that the withdrawal times are so long makes it very hard to understand why the operators focus on something else when the players want this.

Even the new online poker sites which launched in the new regulatory system in Nevada and are licensed by the Gaming Commission don’t seem to really care that much about banking in general. The deposit methods started off really slim and although they improved for both Ultimate Poker and WSOP.com, they are still not great. On the other hand, the withdrawal process is very difficult and as it is with most US-facing gambling sites, the details are buried so deep that most players don’t even know about them. 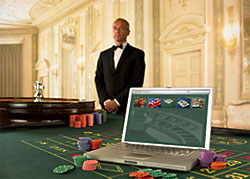 To make things even more interesting, there are some unlicensed gambling sites in the US which have great withdrawal times and yet, the marketing to promote this great competitive edge is almost non-existent. Everybody seems to focus on who has the biggest welcome bonus or what promotions players can get.

Granted, the regulated online gaming industry in the United States is still in its infancy stage and most of the attention is now directed towards New Jersey. The licensed sites can simply crush withdrawal times compared to the ones offered by offshore sites but this hasn’t happened thus far. Maybe things will be different once New Jersey launches its sites later this month and the operators can certainly use their banking advantage to push the players away from the unlicensed sites and towards their own fast-processing and regulated banking methods.