Should The WSOP Player Of The Year System Be Changed?

Poker has been getting a lot of media coverage this month and with the November Nine taking to the table next week, even more attention will come its way. At the start of the month, the Runner Runner poker movie launched in cinemas across the world and despite the fact that the film starring Ben Affleck and Justin Timberlake didn’t receive good reviews from critics or poker enthusiasts, it was quite entertaining. 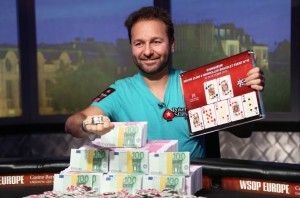 Of course, the main attraction this month was the World Series of Poker Europe as the Main Event concluded over the weekend. Prior to that, Daniel Negreanu won his sixth bracelet and secured more than enough points to win the Player of the Year title for the second time in his career. The fact that the key tournament that got Negreanu the prestigious title was a High-Roller has raised some concerns throughout the poker community regarding the flaws in the WSOP POY system.

Looking at the WSOP schedule for the entire year, it is quite clear that players with big bankrolls have the advantage since they can afford to take part in the events in Australia, Las Vegas and Europe. With the points accumulating from the bracelet events, taking part in more of them significantly improves one’s chances of making it into the money and getting a better POY ranking.

Flying to another continent and booking a hotel room for a couple of weeks in Australia or France is not something that most players can afford to do. Especially if we consider that the POY trophy does not really make all the expenses worth it. The WSOP in Las Vegas does make a lot more sense given the huge number of tournaments taking place in the same venue over a longer period of time.

Another important issue is the fact that the current POY system takes into consideration the size of the buy-in and at the same time includes high roller tournaments. This gives another big advantage to the players that already have the big bankrolls available and can make it unfair for the smaller players doing very well in regular events.

The schedule this year included four tournaments that awarded points but were out of reach for the majority of players. These include the €25,000 WSOPE High Roller which Negreanu won and even the $111,111 Big One High Roller which took place in Las Vegas and was a charity event.

High rollers have smaller fields which means that it is easier to make it into the money and the POY system also has multipliers based on the big buy-in. Known pros with sponsor deals and millions of dollars at their disposal can very easily enter and take a shot at the events while the regular players have to grind their way through massive fields to earn any points.

To be fair, apart from the distinction, the trophy and a few poker headlines, the Player of the Year title does not really matter. If a few years ago it would have been a great way to land a sweet sponsorship deal, now it is simply just there. While it remains a prestigious title because it is hard to win, the benefits of winning the tournaments that get you the points in the first place far surpass getting the most points.

It is a nice mark to have on your resume nonetheless and the system still needs to be changed. The best way to get noticed in the poker world is by winning the major tournaments and this requires a lot of skill, some luck at the right time and the tendency to gamble in certain spots. For the latter, the best option is to check out the popular online casinos and gamble on some great looking games over the internet.

1 thought on “Should The WSOP Player Of The Year System Be Changed?”