The Global Gaming Expo is a big annual event which brings out some of the biggest casino operators from around the world. The expo kicked off on Tuesday and one of the things which stood out was the focus on new slot games, mostly based on pop culture. Some of them are themed after popular movies and television shows since these are very popular amongst players. However, these are not the old slot machines casinos used a decade ago and they incorporate a lot of new features. 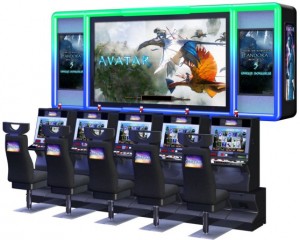 The leading slot machine manufacturers filled the exhibits with their new products. Amongst them were Bally Technologies, International Game Technology and Aristocrat Technologies.

As the casino boats in Hong Kong nicely showed us, it doesn’t really matter where the casino games are as long as players can enjoy their time and have fun. It is expected for these new slots to quickly make it out of Las Vegas, where the conference is being held, and become available across the world. Some of them might also be added on the internet, given the large number of players enjoying online slots.

WMS will soon become part of Scientific Games and the manufacturer took the occasion to show off its latest slot machine titles. Four games were presented, three based on movies and one based on a board game. The goal seems to have been to bring back some nostalgic memories with games based on Ferris Bueller’s Day Off and Beetlejuice while also keeping with the modern times with Iron Man. The latter was certainly very impressive as the machines were “guarded” by large Iron Man statues and the screen nicely presented the high definition gameplay.

However, the most impressive game showed by the company was Clue. Based on the board game of the same name, it is played on a touchscreen. It has a simple interface which covers all the extra features, several progressive jackpots and crisp images. Despite the more popular titles presented by WMS at the expo, Clue was the one which got a lot of attention.

IGT is the largest gaming machine manufacturer in the world and it certainly established its dominance this year at the Global Gaming Expo. It showed off one of its lesser known products, the Texas Hold’Em Heads Up Poker game with pros such as Johnny Chan and Phil Hellmuth. It launched a new slot game based on the popular movie Jurassic Park and heavily promoted it on the floor. The Wheel of Fortune line received new updates as part of its 30th anniversary and the Hangover series got a new title based on the latest movie.

However, the product to benefit from most of the buzz was the new Avatar game. With the highly popular movie behind its theme, IGT did not disappoint as the new game had rich colors, 3D screens and a number of features. Although land-based casino brands don’t always translate online, it is safe to say that this game is highly anticipated by internet players.

Online slots for US players

While the land-based casino game manufacturers are busy coming up with new games, online casinos are not dragging their feet either. The major game developers are always working on new titles and some of them are also based on pop culture. The same rules apply on the internet and the popular brands are usually the ones to attract the most players.

However, most of them are not available in the United States given the restrictions in the market, but there are some online casinos which found ways around these problems. One of them is Jackpot Grand – a casino powered by Realtime Gaming, with over 180 games currently available. On top of the ridiculous list of games, Jackpot Grand also offers industry leading promotions. Get a new player casino bonus Here!

Every new customer can easily pick one of three welcome bonuses and the slots one is 400%, up to $4,000, on the first deposit. There are also other promotions for table games or for a combination of slots and other casino games. New slot games always provide an exciting and interesting opportunity to win big jackpots, no matter if they are online or on machines in land-based casinos.