The Effects Of The Seminole Hard Rock Open

The Florida success story highlights the size of the poker market 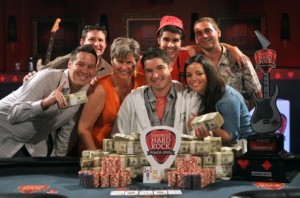 A couple of days ago, we briefly touched on the Seminole Hard Rock Poker Open tournament and its absurd $10 million guarantee. While the short story would be that Blair Hinkle won it for $1,745,245 on Wednesday, the event brought out some very interesting issues regarding the live poker scene and placed Florida on the map.

The Seminole Hard Rock Poker Open made its debut this month and most of the poker world expected it to fail considering the huge guaranteed prize that seemed to have little chance of getting matched by the players putting down $5,300 each. It set a new record for the biggest guaranteed prize pool for a poker tournament, doubling the previous one and making an unprecedented mark in poker. Two thousand players were needed to just match the prize pool and most of them had to come outside of Florida, a state not really known for its poker scene.

When the registration process ended, 2,384 players put their name on the list and took their seats at the Hard Rock tables, making the prize pool worth a total of $11,920,000. With almost 20% more money at play than the already huge prize pool guaranteed by the casino, the Seminole Hard Rock Poker Open was a big success and highlighted Florida as being a major poker tournament market. It also showed that after two and a half years without regulated online poker, live tournament poker is doing very well in the United States; this is of course if the records set by the 2013 WSOP in Las Vegas were not enough.

Florida has being enjoying legal poker for quite some time now but for most of that time, the limits were incredibly low which discourage serious poker players and tournaments. The restrictions were lifted in 2010 and the market quickly developed, hosting stops on major poker circuits such as the World Poker Tour and the World Series of Poker Circuit.

The Seminole Hard Rock Open is the first big poker tournament held in the state and turned out to be quite the success story. This means that poker has a pretty good image and the 19.3 million residents as of 2012 can make for the ideal player pool for more tournaments to come or even for online poker. It is the second most populous state that offers legal poker in the country, after California. Of course, the Championship Event didn’t just attract the locals as the field of almost 2,400 players was made out of poker pros, world champions, celebrities and amateurs alike.

Guarantee the prizes and the players will come

The success of the Championship Event is big news throughout the poker industry right now and will most likely inspire other dreamers to do the same or even look to surpass the $10,000,000 guarantee. Needless to say that there is a certain level of risk at play since putting up 10 million dollars on the hope that enough players will participate is not an easy task.

There is also the possibility to focus on tournaments with a smaller buy-in and guarantee a proportional similar prize pool in order to attract mid-level players to the tables. Event #7 in the Seminole Hard Rock series guaranteed one million dollars while the buy-in was just $560.

Other than that, it is quite difficult to pull off such a huge tournament in the United States anytime soon since there are not that many locations that combine a big local population with the infrastructure needed to support the out-of-town players.

In Europe however, things are a bit different as long as there are no scheduling problems with other major tournaments.

While the Championship Event got most of the attention, the Seminole Hard Rock Poker Open schedule had a total of 33 events, making it a great model for the modern-day poker series. It offered various tournaments to make sure that every player can have his pick. 8 tournaments were non-hold’em and the other 25 covered a variety of formats, with buy-ins being as low as $125 or as big as $100,000 for the Super High Roller.