Cash game traffic is at its lowest during the summer

Summer may seem like the ideal time to just sit back and play some online poker but the stats released by PokerScout tell a different story. If we take a look at live poker tournaments, the summer is a pretty busy period with the WSOP taking place in Las Vegas and then being followed by August with a crowded schedule as well.

The latest live tournament to draw in a huge field took place in Florida, at the Seminole Hard Rock. Poker action in Florida has blown up recently and the Championship Event that just concluded shows this fact. The $10 million guaranteed prize pool was seen by many as a huge number that had little chance of being reached by the buy-ins from the players. With 2,384 players, the total prize pool reached $11,920,000, completely shattering the absurd prize pool. So if live poker is popular in this period, why is online poker not? 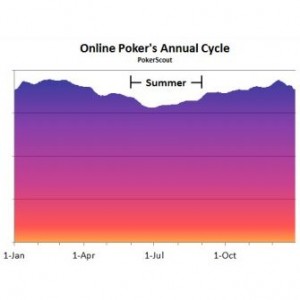 Not many online players are familiar with the cyclical nature of online poker but the stats released by traffic monitoring site PokerScout show an interesting story. The graph shows how online cash game traffic reaches its lowest figures during the summer – in June, July and August. The best explanation for this phenomenon is that the warm weather and the long days make it the ideal time to spend more free time outside and less in front of a computer. Summer is also the most common season for vacations and traveling, so those that enjoy poker over the internet tend to put the virtual cards on hold.

Even if we consider the growing mobile gaming industry and the fact that poker is a very popular choice on mobile devices, people still tend to enjoy other activities during the summer than playing poker. Of course, this is not to say that the virtual tables are without players, but simply that the number is lower if compared to other periods of the year.

The good news is that summer is almost over even if the weather in certain areas doesn’t show it. With the start of September, the traffic increases drastically and flattens out for the rest of the month. It then starts to rise again in October and November and gets a big jump in December. After being high for a period, it then drops when the end-of-the-year celebrations begin but picks up again in January. According to PokerScout, the online poker prime season is from January to mid-March, as the cold season makes for the perfect excuse to stay inside and take down some pots.

The online poker cash game traffic can be compared to television viewership but it is less cyclical, with the difference for poker being about 20% between the summer bottom and the winter peak while television can drop by 50% during the summer. This can be associated with the programing since major networks tend to slow down their content during the summer months and focus on the fall season. Poker on the other side is much more stable, with the only differences being in promotions and tournament series.

Overall, online poker traffic saw a small increase of 0.2% last week according to PokerScout but dropped by 12% if we compare it to the same week last year. There are some differences however, most importantly the Road To 100 Billion promotion ran by PokerStars, which had the 85 billionth hand celebrations this time last year and many players joined the cash game tables for a shot at the prizes.

For those that prefer other casino games over the internet, we should also point out that the traffic can be very similar. With September just around the corner, one can expect to get some nice promotions as the top sites battle it out for the boost in players.

1 thought on “Online Poker Traffic Throughout The Year”