The National Football League is one of the most popular sports leagues in the world and the 32 teams divided into two conferences will kick-off in less than a week. This leaves enough time for gamblers to place their bets as the lines were recently released but can see some major fluctuations the closer we get to the start of a new exciting season of football. 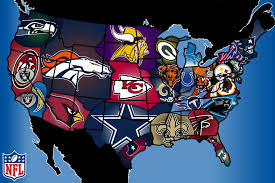 With so many great teams contending for the title, gamblers are sure to have a very interesting season. According to the top bookmakers, the Denver Broncos from the American Football Conference are favorites to take down the Super Bowl XLVIII at a 6/1 line. The finals will be played at the Met Life Stadium in New Jersey in January. Even with the Broncos edging ahead in pre-season betting, there are a few teams from the National Football Conference that are right behind them. The San Francisco 49ers have 7/1 odds to win the title this season while the Seattle Seahawks are third in line as of now, with 15/2 odds.

The close odds can make the teams co-favorites in the NFC and it will make for some great bets on their way to the Super Bowl. Third in the NFC are the Green Bay Packers with 13/1 odds, followed by the Atlanta Falcons with 15/1. The dark horse of the season will most likely be the New Orleans Saints who are now at 20/1 odds to raise the Vince Lombardi Trophy.

Three NFC teams are tied at 22/1 – Chicago Bears, Dallas Cowboys and New York Giants – while the Washington Redskins only have 33/1 odds to win the Super Bowl. Lower down the list, the long shots begin to show as the Minnesota Vikings, the Philadelphia Eagles, the Tampa Bay Buccaneers, the Saint Louis Rams and the Detroit Lions have been listed with 50/1 odds to make for an incredible surprise in the NFL.

In the AFC, things are not as close according to the bookmakers. The team that can come close to competing against the Broncos is the New England Patriots, with 17/2 odds to make it past the conference finals and take the highly coveted trophy. Third on the list, and pretty far behind the top two teams, the Houston Texans are now at 17/1 odds while the Baltimore Ravens which won the Super Bowl last year, will start off from 25/1. The Pittsburgh Steelers share the Ravens line and the division rival – Cincinnati Bengals – are at 33/1.

The 50/1 long shots in the AFC are the Miami Dolphins, the Indianapolis Colts, the San Diego Charges and the Kansas City Chiefs. The teams not mentioned so far have very low odds and the fans that want to place money on their favorites will get a huge return in case the NFL world is completely turned upside-down this season.

The New York Jets have the magic number of 100/1 and the Arizona Cardinals follow with 125/1. Even lower down the list, three teams are tied at 150/1 – Cleveland Browns, Buffalo Bills and Tennessee Titans. The Oakland Raiders with the Jacksonville Jaguars close the list at 250/1 odds and make gamblers consider if there is even one real chance of these teams having a good run in the NFL or if it is just a way to burn some money. The decision remains in the hands of the bettors and as long as there is but one chance, hardcore fans will always believe.

With less than a week to go until the NFL season starts, expect to see some changes in the lines as gamblers place their bets and look to support their favorite teams while winning money in the process.

The Effects Of The Seminole Hard Rock Open