Delaware is one of the states looking towards regulating online gambling and allowing players within state borders to take part in various games of chance over the internet. Unlike the regulations in Nevada, Delaware is not just looking towards real money online poker and there is also no “bad actors” clause that will ban large offshore operators, such as PokerStars.

While there is still some road to go before the real money gambling sites will become available in late October, Delaware regulators have announced that a free-play online casino will launch on Wednesday. This morning, the sites went live as the three casinos in Delaware – Dover Downs, Delaware Park and Harrington Casino – got help from DoubleDown Casino to get one step closer to the highly anticipated online gambling industry in the state. The parent company of DoubleDown, International Game Technology, has also supplied casino equipment for the floors of the three brick and mortar casinos.

The web portals are available for slots, blackjack, poker and roulette, with players easily accessing them via Facebook. These are completely free and can be considered as a way to warm up the player base before the full real money online gambling operation starts. So far, Delaware is on track to become the first state to offer legal online casino games after the legislation was passed last year by the General Assembly. The launch date is still a month later than what state officials planned for when they designed the system but it appears that delays are very common when dealing with the new industry.

New Jersey is also working on launching its first online casinos and is very close to Delaware despite the legislation passing earlier this year. 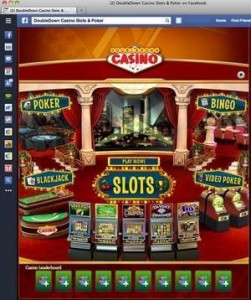 The free games now available on Facebook can be accessed by players from around the world while the real money games that will most likely launch later this year will only be offered in Delaware. The possibility of intrastate compacts can make it more appealing to operators given the small population of Delaware when compared to New Jersey. Sharing player liquidity and making partnerships can be very appealing and the players will be able to take their pick from a longer list of options.

Dover Downs CEO Ed Sutor stated that the free play games will be used as a marketing tool and that players will be able to claim promotional deals to accommodate the population with the online gaming offers. Once the casinos go live, the players will be given special offers to start enjoying real money gambling. The free games will remain available and more titles are expected to be added to the list.

Given the mobile gaming boom and the many players that enjoy playing casino games on their smartphones and tablets, the state secretary of finance Thomas Cook also suggested that the online gaming offer in Delaware will be extended next year in order to include mobile versions. Real money online players within the states will have to introduce their mobile phone number in order to play and the casinos will be able to make sure that they are within state borders by tracking the phone and randomly sending confirmation messages. The process got off to a bumpy start when the first online poker room launched in Nevada but things quickly improved.

It remains to be seen if the launch of online gambling in Delaware will convince other states to follow in the same footprints or if it will attract more attention from the federal government regarding online casino games. The three casinos expect to increase their profits after losing a lot of action to the new casinos in neighboring states but there is no real guarantee for this to happen.