The German poker pro has won another Alpha8 tournament

Philipp Gruissem strikes again! Not even three weeks have passed since the German won the World Poker Tour Alpha8 London event and he has landed another title by taking down the Alpha8 St. Kitts on Sunday.

Along with the distinction of winning back-to-back Alpha8 events, Gruissem also landed a one million dollars score, the third significant cash in the last month. Gruissem recently made headlines by finishing third in the World Series of Poker Europe High Roller Event for $337,915 and then following it up with a WPT Alpha8 win in London, worth $1,379,840. In total, the high-roller pro player has earned around $4.6 million this year and holds the 4th spot in the Global Poker Index rankings. 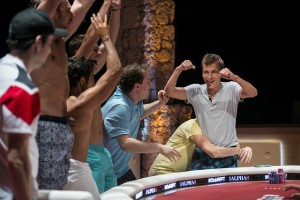 The final table was played yesterday and Gruissem started the day with the second shortest stack of 274,000 chips. However, most of the players were quite close by and his short stack didn’t affect his play at all. Tom McDonald was leading the way with 660,000 and Mike McDonald, was behind him with 448,000 chips.

Since only 28 players took part in the $100,000 tournament, the prize pool would only cover the top five places, which meant that playing the money bubble would be a great way to earn some chips at the final table.

The action didn’t really pick up in the first few hours of play on Sunday but Isaac Haxton broke the silence by going all-in with pocket Jacks before the flop. Fabian Quoss made the call with pocket Tens and he was eliminated in eighth place from the tournament.

Four hands later and Haxton gets Jacks again for another pre-flop all-in battle. This time it was against Mike McDonald’s pocket Sixes and a 6 on the flop sent the PokerStars Team Online pro to the rails.

By this point, Gruissem had earned a few chips and had a mid-stack of 383,000 chips. After 15 more hands, Gruissem had almost doubled his stack and was in a much better position to make it into the money. The bubble finally burst when Timothy Adams was eliminated in sixth place by Mike McDonald. Two more hands go by and another elimination takes place as Gruissem knocks out Scott Seiver after flopping a set and then turning it into a full house.

Mike McDonald was still in the lead with over 1.1 million chips and got even more after eliminating Jason Koon in fourth place. The dinner break took place shortly after and when the action resumed, it was the two McDonalds against Gruissem. The three exchanged chips a few times and Gruissem managed to double up through Mike after getting pocket Kings. Despite being the short stack, Mike McDonald stayed in the tournament for a while longer but he was eventually eliminated after losing a flop to Tom.

When the heads up match started, Gruissem had 1,691,000 chips while McDonald only had 1,110,000. It took 26 hands to finish the tournament as Gruissem was in complete control of the match, never losing the lead.

On the final hand of the 2013 WPT Alpha8 St. Kitts, Gruissem shoved all-in with As-5d and McDonald made the call with Ad-6c. While things were looking good for McDonald, the flop came Jh-5h-4c to give the German a strong lead. The Ks and Th on later streets didn’t do anything to change the situation and Gruissem claimed his second Alpha8 title and the $1,086,400 first place prize.