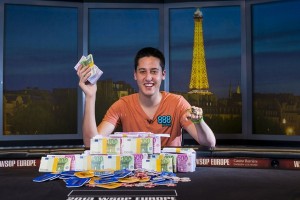 It took a fairly long last day for the seventh edition of the World Series of Poker Europe to conclude as the Main Event final table went into the long hours of the night. When it was all set and done, Adrian Mateos was the one to claim the highly prestigious title and become one of the youngest bracelet winners in WSOP history.

At the age of 19 years, the Spaniard is not old enough to take part in the summer poker action of the World Series of Poker in Las Vegas but he certainly showed skills beyond his young age in this tournament. The Main Event field of 375 players meant that the prize pool will be worth €3.6 million and 40 players would get a share of it. Some of the best players in the industry took part in the huge tournament, including the 2013 WSOP Player of The Year Daniel Negreanu, who finished 26th in the Main Event and secured his sixth bracelet by winning the High Roller yesterday.

Going through the tough field and the very difficult final table wasn’t an easy task for the young player, who was rewarded with €1 million to go with his first bracelet. The final table included two bracelet winners and top pros, but Mateos held his own and had very few mistakes on the way. Just last year he was allowed to enter a casino and now he has won one of the biggest tournaments on the European circuit. Being allowed to practice on the internet generally makes for a much younger generation of great players these days and it is even possible to get all the gaming options you need on your smartphone. Check out the best mobile casino Jack Gold.

In 2015, he will be able to take a shot at the big WSOP Main Event in Las Vegas but until then, he will most likely be seen in other major tournaments in Europe. He should also be proud of being the second player from Spain to win a WSOP bracelet, as Carlos Mortensen won the Main Event in 2001 and another bracelet in 2003.

When the final table started, Mateos was looking very well with the high stack in front of him and didn’t have to worry about losing it for most of the final table. Six countries were represented in the last day of the Main Event, which nicely represented what the World Series of Poker is all about and how it can bring different types of players together, all aiming for the same thing. Fabrice Soulier and Dominik Nitsche were the ones with bracelets already on their resumes and Benny Spindler managed to repeat his sixth place finish in the WSOP APAC Main Event with another sixth place here.

The heads up action was against Mateos and Soulier and despite the fact that the latter had a 4:1 disadvantage when it started, it took 160 hands for the winner to be determined. After reversing the stacks and both players showing great strength, the tournament finally came to a close. With Mateos having a substantial lead again, Soulier moved all in with 9d-8d and Mateos called with As-Kc after taking some time to think about his decision. The board ran 4c-Jh-9s-Ks-5d and the young gun secured the win with a pair of Kings.

After his win, Mateos was interviewed by WSOP reporters and he stated that he feels amazing and that we will see more of him in future tournaments. After such a long and demanding day, some rest is certainly needed and those watching the live stream offered by WSOP also need to sit back and have some fun after an entire day of poker action. Get 20 free spins and try your luck at some of the best slots on the internet.