The leading online casino developers make sure that new games are constantly being added to the great world of online gambling so that players always have something new to check out. With various companies powering countless online casinos, it can be very difficult to keep up with the latest titles, but the action is normally found at the popular sites, which have industry-leading games and the promotional incentives to keep customers happy. 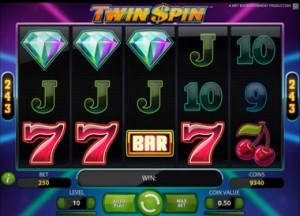 October already promises to be a great month for casino players, especially for those that enjoy online slots as some exciting new slot games have been announced by three of the best casino game developers in the business – Net Entertainment, Rival Gaming and Microgaming.

Players which enjoy NetEnt’s Starburst slot game will be happy to know that they can now take on the move thanks to the brand new mini and mobile version of the popular game. Starburst Mini maintains the same overall design of the original slot but is meant to fit in the palm of your hand. It has 5 reels and 10 paylines, with a Starburst wild to help players cash in on the big prizes.

The main announcement made by NetEnt this month is the release of a new slot called Twin Spin. The launch date has been set for November 21 but a video showing some of the in-play features has just been made available. The main feature of this game is the fact that each spin starts with identical reels which are linked together; ergo the name Twin Spin. During a spin, more reels can become just like the initial two, making for some very nice payouts. There are a total of 243 ways to win on the five reels and the basic NetEnt features are available.

While there are two more weeks until the game is launched, interested players can get started with a NetEnt casino and enjoy some of the other great games available. The Casino Luck online casino is certainly a great choice and new titles such as South Park and Magic Portals are already up and running.

Microgaming has been very busy lately and the many fans certainly appreciate it. For October, the Isle of Man based software development company has three new slot games planned. These range from different themes but all promise an entertaining gaming experience as Dolphin Quest, Rhyming Reels – Georgie Porgie and Paradise Found will all be made available by the end of the month.

The three games will be available on Flash and Quickfire platforms while Dolphin Quest will also be available for download. The symbols will be spinning on 5 reels and various features such as scatters, stacked and multiple wilds and free spins will keep the level of excitement very high. Paradise Found will have a maximum prize of 20,000 coins for the lucky players that get the winning combo.

Since Halloween is getting very close, Rival decided to keep with the scary theme by launching the third installment of the Scary Rich series. The action takes place in a haunted mansion as three paranormal investigators attempt to unlock the spooky secrets. Monsters, skulls and werewolves await players brave enough to spin the symbols on the new Scary Rich 3.

The game will make its way on all the popular Rival-powered online casinos. Sunset Slots Casino already has a very impressive selection of casino games provided by Rival, including big progressive slots. The new game will fit in nicely and new players can get started right away with a big welcome bonus of up to $500 on the first three deposits.

Once the welcome bonus is claimed, the online casino keeps on giving away free money to its regular customers. In fact, every day of the week comes with a special reload bonus and a monthly reload bonus is also added on top. Refer a friend to the casino or celebrate your birthday as part of the community and Sunset slots will give you even more free money to spend on the great looking casino games. Although slots make up the majority of available titles, table games and video poker are just a few clicks away. Try Sunset Slots Here!