The $3,500 No Limit Hold’em Main Event concluded in Los Angeles 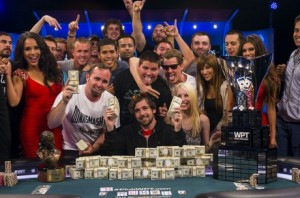 Season XII of the World Poker Tour is underway and the stop to determine who will take down the prestigious Legends of Poker event has just ended. Jordan Cristos will be the one to walk away with the title and have his name engraved on a silver plate along with the other winners on the WPT Champions Club trophy.

The final table of the event was televised and there were several big names and big personalities to make it a very entertaining show. The chip leader at the start of the last day was Ryan Goindoo with 5.57 million chips, followed by Phil Laak and Jordan Cristos who both started with less than 5 million – 4.73 million and 4.265 million respectively.

John Gordon and Alexandru Masek were next on the list with just under 3 million in chips each while Dan Heimiller was holding the short stack of 1.07 million going into the final table.

The five players that made the final table with at least 36 big blinds were guaranteed a good position which allowed them to make some moves without having to commit their entire stacks on a coin flip. Although Ryan Goindoo had several good finishes in live tournaments and his large chips stack gave him a good position to compete against the other five players, most of poker fans were on Phil Laak.

After just 45 hands at the final table, Laak found himself all-in for his tournament life and in a pretty bad shape with pocket Tens against pocket Kings. John Gordon had the WPT Champions Club member covered but the board ran out to give Laak a straight for a very important early double-up.

After suffering such a bad beat, Gordon was left with just three big blinds and it didn’t take long for them to go to Ryan Goindoo as Gordon was eliminated in sixth place for $85,080.

Phil “The Unabomber” Laak out in fifth

Although he got off to a good start, Laak was the next one to go to the rails. Jordan Cristos started from early position and then called a shove from the small blind made by Laak. His pocket Queens had Laak’s As-8c covered and another queen on the turn made it a set for Cristos and Laak was out in fifth place with $109,385 for this effort.

Alexandru Masek left the final table in fourth after his J-9 of hearts faced Goindoo’s A-2 off. An ace on the turn secured the win for the latter and Masek was left without any more chips and with a $156,790 check with his name on it. However, Goindoo didn’t manage to hold on to the chips for long as they quickly made their way to Dan Heimiller. The WSOP bracelet holder got A-8 off into Goindoo’s A-4 off and the 8 on the flop meant that the pot would go his way.

Despite starting the day with the smallest stack, Heimiller managed to fight all the way to the heads-up match as Ryan Goidoo was eliminated in third for $233,360.

It took about eight hours of action for Jordan Cristos to walk away with the trophy. The decisive hand against Heimiller saw Cristos holding Kh-4h against Ah-9h. All it took was a 9 to come on the flop and give Cristos a pair that would win him the biggest cash of his career. Heimiller got $356,115 for his amazing run in the tournament and great performance at the final table while Cristos took the $613,355 first place prize, a seat for the WPT Championship and left his mark on the World Poker Tour Champions Trophy.

What Type Of Online Bingo Player Are You?

Will Nevada Maintain Its Early Advantage?