With the busy poker month of August underway, it didn’t take long for some big headlines to appear. Over the weekend, the 2013 Australia New Zealand Poker Tour, known as the ANZPT, concluded its stop in Queenstown with the Main Event attracting 126 players. With a buy-in of NZ$3,000, this tournament may not have the same prestige as the World Series Of Poker or the World Poker Tour, but it is highly respected in the poker world. Many players wait for it all year as Queenstown is an incredible destination, filled with fun activities to fill the days once the poker action ends.

The thing that stood out the most from the Main Event is the champion that took it down. While every poker tournament has a winner, this one was indeed a spectacular win as Jonathan Bredin overcame all odds to take the first place prize. 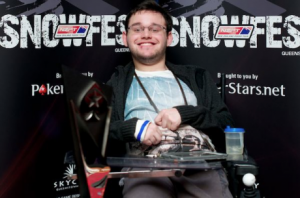 A story for the history books

Bredin is living with cerebral palsy; a condition that affects the motor control centers in his brain, severely limiting his movements. He uses a motorized wheelchair and a customized iPad to make up for the difficulty he has in speaking. A friend helps him give voice to his thoughts and also acted on his behalf during the tournament.

The friend, Chris, showed Bredin the cards and did the actions needed at the table but he was only following Bredin’s orders. Chris did not help with any poker strategies or decisions while taking part in the tournament, so the entire win can be attributed to Bredin, who was helped to overcome his condition by Chris.

When the final table started, Bredin was leading the pack and managed to maintain his lead throughout most of the final day. He had a small chip disadvantage when the heads-up match against Daniel Laidlaw started, but managed to win all the chips by the end. During heads-up, the chips were exchanged back and forth and it looked like Bredin would only finish second at one point. He went all-in with K-2 off against A-K suited but the beauty of poker allowed him to stay in the tournament with a lucky deuce hitting the table.

After he managed to double up, he went on to end the tournament. The hand started with Bredin raising to 80,000 before the flop and Laidlaw shoved all-in for his remaining 700,000 chips. Bredin didn’t take long to make the call as he was holding pocket Kings and was looking good against A-Q of diamonds. A King came on the flop to give Bredin a set while Laidlaw had a straight draw and a flush draw. None of his outs came however, and Jonathan Bredin became the new ANZPT Queenstown champion, his first big live tournament win.

As an extra piece to make the story even more interesting, Bredin already had a tattoo on his left arm with the two black Kings that won him the tournament. He stated after the tournament that he wanted to get a poker-themed tattoo but found pocket Aces to be too boring, so he decided to opt for pocket Kings. The fact that this was exactly the final hand he had in the biggest live tournament of his life thus far is an incredible coincidence. If we would do the math, there are 1,326 starting hands in Texas Hold’em, which means that the two black kings Bredin has tattooed on his arm represent 0.00075% of all the possible starting hands.

He also said that he will use the money to buy a special car that will make it easier for him to get in and out. Needless to say that this tournament was not all about the money for Bredin and after proving that he has the skills to take down a big live event, he will most likely continue to play the game he loves.

How Does A Mobile Casino Player Add Up?