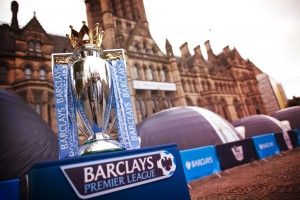 The Premier League is an English professional league that brings together some of the biggest football clubs in the world. The competition has become very prestigious over the years given the fact that it is the primary football tournament in the country and there are various top teams fighting for the title. There are 20 teams that take place every year and these include the English clubs, the Welsh clubs that can qualify and also a few Scottish or Irish clubs.

The action started Saturday, on August 17, but gamblers got the chance to place their bets earlier on. Bookmakers released the lines before the opening weekend and the teams that had the best odds of taking down the Premier League title were Manchester United, Manchester City and Chelsea, with 11/5 odds.

Right from the start, the safe bet was probably on Manchester United given the fact that they are the defending champions and have already won a record of 20 Premier League titles. Of course, the retirement of Sir Alex Ferguson from the coaching position raises a few concerns and his replacement, David Moyes, will be in charge of leading the Red Devils to another title. City and Chelsea also have new managers which levels the playing field a bit.

The first weekend of the Premier League has already concluded with most of the results going in favor of the favorite teams. Sports gamblers certainly had a busy couple of days as seven games were played on Saturday, two on Sunday and one more still to be played later today.

Liverpool defeated Stoke City 1-0, West Ham took a 2-0 victory over Cardiff City, Sunderland lost to Fulham 0-1 and Norwich City tied with Everton at 2-2. West Brom lost to Southampton 0-1, Aston Villa took a 3-1 victory over Arsenal, while Manchester United got 4-1 against Swansea City to end the action on Saturday. Sunday then came with Tottenham claiming a win over Crystal Palace 1-0 and Chelsea scoring 2 against Hull City Tigers which didn’t manage to get on the board.

There are quite a few things that stood out from the weekend, starting with Arsenal having to relive the bad start they had in 2011. While the team didn’t lose 8-2 against Manchester United like on August 28 last year, a 3-1 defeat at the Emirates against Aston Villa didn’t look good. There are few clubs in the Premier League that Arsenal can justify a loss on their home field but Villa is not one of them, especially in the manner they did. Villa simply had Arsenal dominated by scoring the last three goals and leading for the final half hour undisputed.

Manchester United came out swinging as the red side of Manchester looked to get the spotlight once again after they were deprived of it before the season. The Red Devils have almost the exact same squad they had last year, when they won the Premier League, and the change in management doesn’t seem to affect their performance. Man United simply torn Swansea City apart on Liberty Stadium.

Liverpool continued this year with the same good and bad luck they had last year. While the team shows strong play, it doesn’t always reflect in the score and lesser teams stole the matches more than just a few times. On Saturday, Simon Mignolet had a great penalty kick save in minute 89 to preserve the 1-0 score from the first half.

UK betting giants make sure that gamblers get the best odds for their sports bets. As mentioned before, Manchester City will be playing Newcastle on Monday, with the former being favorites at 3/10 odds. Chelsea will face Aston Villa on Wednesday as 2/7 favorites while Villa has 9/1 odds to continue their great start in the Premier League.

Despite dropping their first game, Arsenal remains one of the top clubs in the tournament and bookmakers give it 11/10 odds to take the win against Fulham on Saturday; starting another action-packed betting weekend.

How Does Rakeback Influence Online Poker?