A couple of years ago, the Oklahoma City Thunder played against the Memphis Grizzlies in a Western Conference semifinal. Back then, the Thunder won the seven game series with 105-90 in the final game in which Kevin Durant scored 39 points. Now, the two big rivals will meet again in the NBA playoffs with the first game taking place on Sunday, May 5, at Oklahoma City. 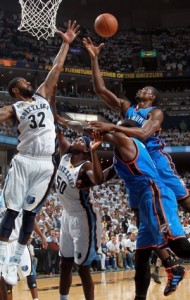 It is safe to say that this series will be very interesting to watch and that the players will get very physical. There have been a total of 9 technical fouls take place between these two teams during the past three times they met this season and the tension will only increase now that we are in the playoffs. Two of the players actually had a big confrontation in one of the games and were eliminated from the court but still continued their heated argument in the hallway.

Kevin Durant mentioned that he expects it to be a lot of pushing and shoving going on this series because that is simply what they do. The high stakes of the playoffs only take things closer to the edge and great games are expected to take place.

During the regular series, the Grizzlies won 2 out of the 3 meetings and lost one in Oklahoma City, after trading Rudy Gay. The team has had new additions to the lineup since then and has been looking strong in recent games.

There have also been a lot of changes for Oklahoma City; most notably being the fact that Kevin Durant is out due to knee surgery and will not be coming back this season. Lionel Hollins, the coach for the Grizzlies, declared that Thunder is still a very good team, even without its All-Star point guard. Even if the first game doesn’t go well of Memphis, the team became the first one to lose the first two games in the playoffs and then come back to win the next four and take the series.

Going into the first game, the big online sportsbooks put the Oklahoma City Thunder (50-18) as -155 favorites and give The Memphis Grizzlies (45-21) a +135 line. The spread is +3 for Memphis and -3 for Oklahoma with the Over/Under bet at 186.5. The trends so far show that 64% of gamblers placed their money on the Memphis line and 51% on the spread while 95% wagered on the over 186.5 total points. Be sure to check out this guide on teaser bets for beginners before jumping into the betting pool.

The series is certainly hard to predict and this is what makes it so exciting. The Memphis Grizzlies have a very good chance at taking the series, given the fact that they won games in Oklahoma City before and should not be intimidated by not having the home court advantage. The most difficult game to call is certainly the first one, and not just because it will offer a great indicator for the games to come, but mostly because both teams are coming from Game 6 wins a few days ago. The over bet however does look to be the safest choice since in the last 28 games between these two teams, it went over the line 21 times; mostly because both teams are very aggressive and they don’t plan on backing down.

The final prediction for the first game would be that Oklahoma City Thunder takes the win by one point against the Memphis Grizzlies at 96-95, covering the Over 186.5 points bet. However, it is a very hard pick to make so be sure to stay up to date with more sportsbetting news to get the latest updates.