The 2013 Open Championship concluded on Sunday and it was one for the history books, for several reasons. The first and most important one would be the fact that Phil Mickelson solidified his position as one of the best golf players in the world after coming back from behind to take the lead in the final round. 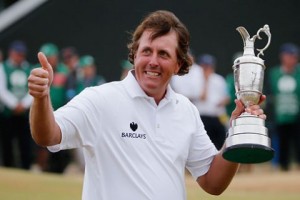 For most fans, Mickelson was just a small blip on the radar during this weekend since most of the attention was focused on Tiger Woods. The last round on Sunday was simply expected to be a duel between him and Lee Westwood but Mickelson completely caught everyone by surprise with a perfect game and took the trophy. Westwood and Woods were not even battling for the second place towards the end of the round as they showed pretty bad performances.

While the spotlight was on Tiger Woods, Lefty went to work on the gorgeous hallowed ground in Scotland to register a final round 66. This is the lowest round of the Open Championship and meant that Mickelson would take the lead after being five shots behind. With his first Claret Jug in his hands, the spotlight was no longer on Tiger Woods, who had a disappointing 6th place finish while being tied with Zach Johnson and Hideki Matsuyama at +2.

Gamblers which saw the potential in Mickelson got a nice payday when the tournament was over as bookies were giving him 25/1 odds to win the Open title when the action first started. Before the final round, his odds improved to 10/1 but Tiger was still the favorite to take his first US Open trophy since 2008. Westwood was the second favorite and even some less known players, like Zach Johnson and Stenson, had better odds than Mickelson.

It was arguably the best round Mickelson ever played in his career as he conquered one of the most difficult golf courses in the circuit. His performance on the last six holes was an amazing show of talent as he hit four birdies to finish the final nine holes with a total of 32 strokes. Everything seemed to work perfectly and he was simply in the zone; much like many other players that go on to have an amazing game. Check out the Lakers defense against the Nets in the past NBA season for more thrilling action.

With two other majors in his portfolio and now an Open Championship title to go with them, Mickelson is one step closer to having the highly coveted career Grand Slam. The 43-year-old pro from California already had an impressive resume with three Master wins and one PGA Championship title. The one missing is the US Open, where he finished in second place six times throughout his career. We will simply have to wait and see if he manages to make the final step next year.

To make sure that gamblers always have what to bet on and win more money, FanDuel offers daily fantasy sports leagues with huge prizes guaranteed. While golf is not on the list, all the popular leagues in the US are available for players to choose from; including the NBA, NFL and MLB.

Try fantasy sports betting and choose which players you want on your team, but make sure you fit in the salary cap. Tournament buy-ins can start from as little as one dollar, with the winner getting a few hundred. Needless to say that there are plenty of bigger tournaments to enjoy and there are stakes for just about every gambler across the over 5,000 daily leagues. Winning thousands of dollars has never been this easy and fun!