The World Series Of Poker action-packed summer is now over. After six weeks, 62 bracelet events, thousands of players and millions of dollars, the 2013 WSOP has dealt its final hand in Las Vegas for the summer. The remaining nine players in the Main Event will come back in November to play for the prestigious title, the diamond bracelet and the $8,359,531 first place prize. 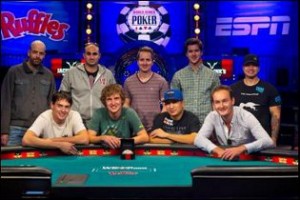 The one in the best position to win the 2013 WSOP Main Event is now JC Tran. He is the chip leader with 38 million and has plenty of experience in live tournaments; having won two WSOP bracelets and a World Poker Tour Challenge. Tran didn’t have the best start in the tournament as he was down to 12,500 chips on Day 3, when the blinds were 1,000/2,000. However, he was able to come back and have an incredible Day 7 to eventually finish the first stage of the WSOP Main Event with the high stack.

He took the lead during Level 34, after winning a big hand against Jay Farber, who will accompany him to the final table with 25,975,000 chips.

Other players at the table include WSOP bracelet winner Amir Lehavot from Israel (who took down Event #7: $10,000 Pot-Limit Hold’em Championship in 2011), Circuit regular Ryan Reiss and online poker pro David “Raptor” Benefield. The latter will come back as the short stack with just 6,375,000 chips and Mark Newhouse is the closest one to him with 7,350,000.

Given the great year that Canadian players have been having at the WSOP, the only thing that would make it even better would be for the gold and diamond bracelet to go north of the border. The hope lies in Marc McLaughlin since he is the only Canadian left at the final table and will come back in November with a nice 26,525,000 stack. Sylvain Loosli (19,600,000 chips) from France and Michiel Brummelhuis (11,275,000 chips) from the Netherlands complete the list of players from outside the US which will try to put their names in the history books.

Players from Europe and Canada certainly have an advantage if we consider the booming online and mobile gambling regulations that allow them to enjoy their favorite games in a safe environment.

27 players came back on Day 7 to resume the action from Level 30: 60,000/120,000/15,000. After three hands, the first elimination took place as Benjamin Pollak started with a 250,000 bet from the button. Maxx Coleman then moved all-in for about 3.8 million and Pollak called for this remaining 2.9 million to show pocket Nines against Coleman’s A-4 of clubs.

Pollak started as 66.62% favorite in this situation but the Js-2s-3c gave Coleman a straight draw. The Jh on the turn improved Pollak’s survival chances at around 84% while Coleman only had 7 outs remaining. The 5c on the river was one of them and Pollack was out in 27th place; getting a $285,408 payday.

The surprise of the day was the elimination of the chip leader at the start of the day, Anton Morgenstern. He started pretty good and won a huge pot against 2012 Octo-Niner Steve Gee with pocket Eights which improved to a set on the river. With a stack of almost 30 million, the young player that a lot of people were expecting to win the Main Event this year took a few big hits and was out.

Mark Newhouse won two big hands against Morgenstern and Fabian Ortiz drew the final blow with pocket Aces to send the German to the rails in 20th place. He won $285,408 for his impressive run in the Main Event.

The final nine players will return on November 4th to battle it out for the remaining prize pool of over $26 million. Until then, the November Niners can work on their strategy or just relax in order to come prepared to win. Fans on the other hand can enjoy some great casino games over the internet for free. Try an online casino with 20 Free spins!