Defense’s dress codes have always driven everyone crazy and inspired them, irrespective of the country they belong to. Defense’s themes and codes signify power, aggression and attitude to conquer over the opponent. This is the reason why we encounter armed forces’ themes over many online and offline computer games too. Air force too doesn’t lag in this winning attitude. The flying corps has always inspired everyone with their aggression of taking over opponents while flying high.

The essence of air force can be felt in the newest Playtech powered video slot. The developers have confirmed the launch of their air force themed video slot game, Wings of Gold this week. The 5-reel, 20 pay-line slot game has enough features to drive any slot enthusiast crazy with XtraWin options up to 60,000 credits. To be precise, the XtraWin feature comes in part and parcel with 2nd, 3rd and 4th reels, which have an induced Pilot signature.

On the other hand if we try to analyze the game, we’d find that the Wings of Gold is actually a symbol of conquering, as the players do get awarded with a certain multiple of their betted amount in any case at least three of the five reels flash same symbol. For example, the scatter payout of five symbols is 100 coins. Apart from such handy payout structure, the Wings of Gold logo symbol triggers Medal of Honor Bonus too. In this bonus structure, the slot generates a random number between 5 and 15 after a player opts for a particular medal out of the many displayed. For example, in case the generated number displays to be 5, the player gets 15 free spins, while in case the player gets 15 displayed on the screen, he gets 100 free spins to play. The best part of the Medal of Honor Bonus lies with the payouts. To be precise, the wild symbol has a double payout during free spins, whenever it substitutes in a winning combination. Winnings can be taken to the next level very easily. In order to make money from already won money, all that a player has to do is to retrigger free spins using the same medal. 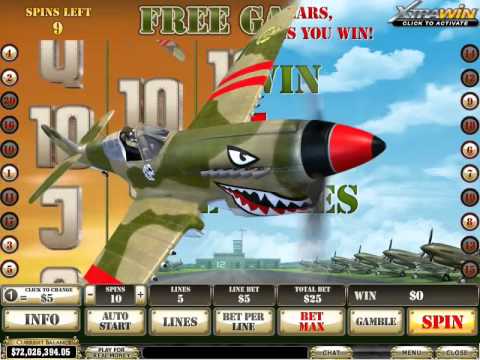 developing giants have made the game available for all the casinos powered by the Playtech software, where players can feel the heat of conquering on with the flying corps theme.